The Queen Of Hill Stations

Mussoorie is the place you should be heading to. Nestled amidst the foothills of the Garhwal Himalayan ranges, Mussoorie, also known as Queen of The Hills, stands at an altitude of 7000 feet above sea level, and has a cool, pleasant climate throughout the year. The pristine, natural beauty of Mussoorie makes it a very popular choice of holiday for honeymooners. If you want to enjoy the beautiful sight of the rolling green slopes juxtaposed with the snow-capped peaks of the Himalayas, Mussoorie is the place for you to be.

This beautiful hill station is the perfect retreat from the sweltering weather of the plains, and the fact that it was a very popular holiday destination during the British era can be seen from the multitude of British remnants engulfing the city, such as the archaic architecture of the hotels and churches dotting the entire terrain. One of the most popular tourist attractions in Mussoorie is The Mall (also known as the Mall Road), which is a slightly steep boulevard that has eateries and other shops lining its entire stretch. From the little houses spread around the area to the architecture of even the lamp posts, The Mall gives off a distinct colonial vibe. 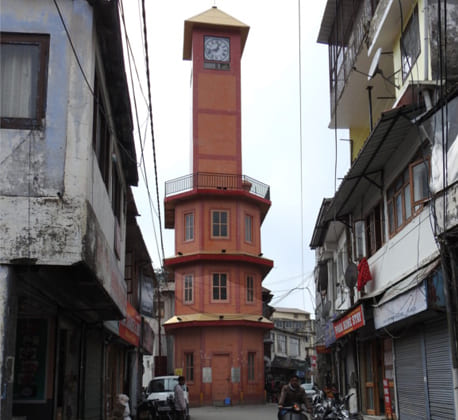 Places to Visit In Mussoorie 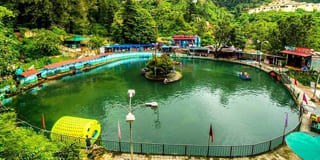 Mussoorie Lake is an artificial lake developed and maintained by the City Board and the Mussoorie Dehradun Development Authority. Surrounded by a mesmerising natural charm and some surreal views of the charming Doon Valley, this lake offers a rejuvenating retreat in nature’s lap.

The scenic Mussoorie Lake is a newly developed picnic spot originating from a natural waterfall. Other than the umpteen outdoor activities available at the site, paddle boating is the most popular one. For a nominal fee, you can paddle your way across the lake to enjoy scenic views of the valley and a serene boating experience. Mussoorie Lake also has a hoard of eateries and refreshment stores to help you stay hydrated and full. Besides, the striking road leading to the lake is bound to give you some picture perfect moments and some memorable memories for life. 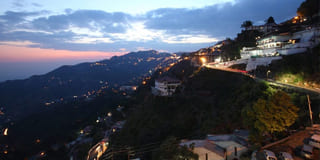 Mussoorie Mall Road
Located in the heart of Mussoorie, the Mall is a colonial relic with benches and lampposts filled with modern shops, video game parlours and skating rinks.

You can often find the author Ruskin Bond browsing the Cambridge Bookstore. There would be a lot of local vendors around including photographers who can click awesome photographs for you. Do try out a photograph in local traditional attire here. 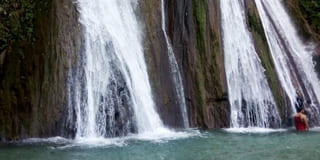 Kempty Falls
Kempty Falls is a beautiful cascade of water that falls to the ground from a mighty altitude of 40 feet. Surrounded by high mountain cliffs, Kempty Falls is nestled at an altitude of around 4500 ft above the sea level. This place was developed as a picnic destination by John Mekinan owing to its captivating surroundings and scenic beauty. One of the most renowned waterfalls in Uttarakhand, Kempty Falls offers a mesmerizing panoramic view as the water falls from the mountains.

The name of Kempty Falls is taken from the terms "camp and tea" implying the elaborate tea parties that were once organized here in evenings eventually leading to a localized name Kempty. Offering a stunning view of water stream cascading down from a great height, it divides into five channels. The pond formed at the bottom of the falls makes an excellent spot for swimming and bathing. A flight of stairs leads to the pond where one can soak in the fun with friends and family. Quite famous among the tourists as a picnic spot, the perennial Kempty waterfall is crowded almost throughout the year. 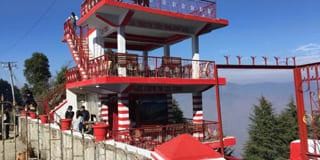 Lal Tibba
Lal Tibba is one of the most stunning viewpoints in the region. The name literally translates to 'red hill'. Rising to a height of 2,275 meters (7,164 feet), Lal Tibba is the picture-perfect place to fulfil your sightseeing desires. The telescopes installed here are priceless, and aid in cherishing the beautiful unfettering panoramas of the Nilkantha peak (6,596 meters) in Badrinath, Kedarnath peak (6,940 meters), Banderpoonch range of three peaks with the highest rising to 6,316 meters can all be viewed on a cloudless day.

The Lal Tibba region has long been occupied, serving as a summer getaway during the British-Raj and a recovering station for the military, hence gaining popularity as a cantonment cum hill station. It is now occupied by the Indian Military Services. In the form of a small terrace, La Tibba has mesmerizing views of the Tibet border. The place is relaxing and has remains of British Architecture. There are only a handful of places that offer such exhilarating views and being in Mussoorie, it is somewhat necessary to tick this off your must-visit list. There are few things better than being surrounded by a thick verdant forest cover, a tiny little picturesque hill station within eyeshot and the horizon studded with snow-clad mountains! 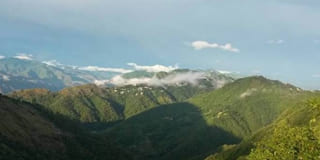 Cloud's End
The Cloud's End marks the geographical end of the beautiful hilltown of Mussoorie. Surrounded by thick oak and deodar forests, it tracks 2 km up to the Benog Wildlife Sanctuary offering a lovely walking track, taking in the soothing mountain air. Cloud's End is visited for the breathtaking views it offers, especially of the Aglar River Valley.

Another major attraction at Cloud's End is a heritage building set up by a Britisher in 1838, which is one of the oldest buildings in Mussoorie. Retaining the original architecture and other relics, it has now been converted into a heritage hotel (Clouds End Forest Resort). Tourists spend some tranquil time during their stay, along with partaking in activities like hiking, hill climbing and nature walks arranged by the hotel on request. People often club the visit to Cloud's End with the famous attractions nearby - Jwala Devi Temple and Benong Wildlife Sanctuary. 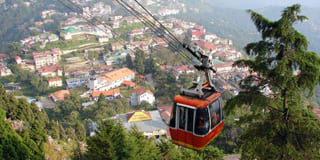 Gun Hill
Gun Hill is the second highest point in the entire area of Mussoorie standing tall at an altitude of 2024 meters! The scene from the top of this hill is a panoramic view of the snow-clad Himalayan ranges right beside the widespread Doon Valley and a full view of the hill station of Mussoorie. The Gun Hill, located 400 ft above the Mall Road, is a popular attraction, especially amongst the photographers and nature lovers.

The highlight of Gun Hill is the ropeway which provides a scenic view of the Himayalan ranges. The hill was named so because of the presence of a gun at these hills during the pre-independence days. The gun was fired during the day to enable people to adjust their watches during those days. 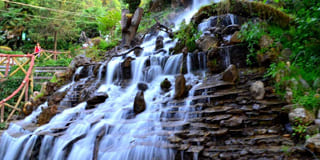 Company Garden
The Company Garden is a popular tourist attraction in the mountain city of Mussoorie, located around 3km from the main Mall Road. Nestled amidst the high Himalayas, it is a patch of green maintained by the Garden Welfare Association of Mussoorie and was laid down by Dr. H. Fackner in the early years of this millennium. The vibrant garden is a lovely place to spend an entire day out with your family and friends within the lush greenery and the beautiful blossoms. You can find people enjoying their time sitting or strolling or taking photographs in the eclectic lawn of the garden.

There is an artificial pond for boating with manmade waterfalls at the Company garden, also known as Municipal Garden, that makes a lovely scene to behold. If you have kids with you, they will also have a gala time in the park with all the exciting rides and so much space to run around. You can even satisfy the nature lover in you in this delightful place and also take back a part with you - buy any small potted plant at the nursery or any souvenir from one of the shops inside the garden. 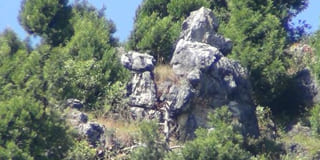 Camel's Back Road
This site is a testimony to the magnetic allure of Mussoorie. Since the Camel Back Road is cradled in the laps of nature, it is a very popular attraction for locals as well as tourists for strolling and jogging. Tourists also flock here to get a panoramic and unobstructed view of the sunrise and sunset. You can also enjoy horse rides here along with gorging on scrumptious food, which tastes even better in the hills.

The pristine and clean Camel Back Road has been named so because of the rocks that line up on either side of the road that resembles the shape of a camel's hump. Owing to its proximity to the Doon Valley and its dizzying altitude of 2000 meters, this road is blessed with a constant blow of a soft and calming breeze that energises you from within. Enveloped by the majestic snow-covered Himalayas and decorated by a carpet of dense tall trees, Mussoorie can rightly be called as heaven on earth; and the Camel’s Back Road packs the essence of this fascinating city. 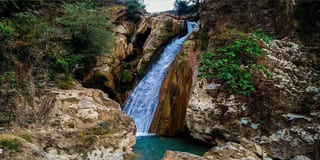 Bhatta Falls
Located at a distance of about 10.5 kilometres from the Mussoorie Library Bus Stand, the Bhatta falls is hailed as one of the best waterfalls in Mussoorie. Reaching the exact spot of the waterfall requires a little hike of 500 metres, making Bhatta Falls a good place for the adventure enthusiasts too.

This natural waterfall cascades down from an altitude it 30 feet into a circular pool. One of the most incredible facts about Bhatta Waterfall is that it is not yet commercialized, which retains its natural setting and offers peace to the visitors. The place offers great views for capturing nature at its best and raw form. The pond at the bottom is where people enjoy swimming and bathing. There is a children's park there as well with slopes and swings provided for them to play. The place has some small eateries as well. Overall, it is a must-visit for families, children as well as friend groups. Not to mention, it is an ideal location for nature lovers and photographers as well. 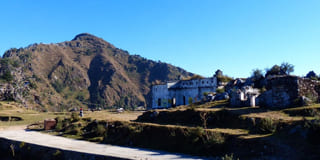 George Everest House
A piece of documented history awaits the tourists 6 km from the library Chowk (or Gandhi Chowk). Built in 1832, the house and observatory of Sir George Everest, the Welsh surveyor and geographer and the Surveyor General of India (from 1830 to 1843). He played a major role in the Great Trigonometric Survey of India which extended from South India to Nepal, covering a distance of about 2,400 km. After this survey, world’s highest peak was discovered; that peak was Mount Everest, and it was named after Sir George Everest in 1865. From where the old residential structure stands, one can see the Doon valley at one side and the marvellous snow-covered Himalayan peaks at the other. Everest House is well-connected by motorable roads; however, the way becomes a little rough after Haathi Paon.