Pauri in Uttarakhand is one of the most scenic places in the Garhwal Region. This place is known for its natural uniqueness and exclusiveness. A treasure trove of nature’s bounty, visitors love to enjoy its picturesque beauty manifested in the form of verdant forests, snow-capped mountains, gushing waterfalls and sacred religious sites. This place is just like a hidden treasure that beckons the tourists to explore and enjoy its immense beauty. The Pauri District is one of the prominent districts in Uttarakhand. Perched at an altitude of 1814 m above the sea level, on the slopes of the Kandoliya Hills, Pauri attracts a large number of tourists. One of the prominent hill stations in Uttarakhand, Pauri offers a glimpse into daunting Himalayan Peaks like Swargarohini, Bander Poonchh, Thaliyasagar, Sumeru, Kedarnath, Neelkanth, Chaukhamb, Nandadevi, Hathiparvat, and Trishul. Watching the sun setting over the horizon behind these imposing mountain peaks is a sight to behold. There is no dearth of attractions in Pauri.

Our Pauri Garhwal travel guide is overflowing with information on best places to visit and amazing things to do, which makes it quite essential for the travellers looking for an impeccable experience. Also, handcrafted for you are the varied holiday packages by Tour My India that ensure a vacation unlike any other. 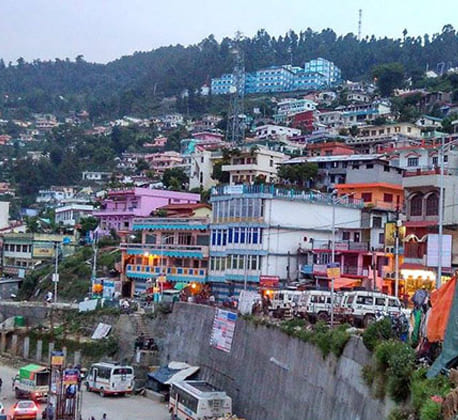 The development of human civilization in the Garhwal Himalaya has been parallel to the rest of the Indian sub-continents for centuries. Katyuri was the first historical dynasty that ruled unified Uttarakhand and left some important inscriptions in the form of inscriptions and temples. In the period after the fall of Katyuri, it is believed that the Garhwal region was fragmented into more than 64 princely states and one of the main princely states was Chandrapurgarh, which was descended from Kanakpal. In the mid-15th century Chandrapurgarh emerged as a powerful princely state under the rule of Jagatpal (1455 to 1493 AD), who was a descendant of Kanakpal. At the end of the 15th century Ajaypal enthroned Chandpurgarh and united several princely states with his chieftains and adjusted them into a single kingdom and this kingdom came to be known as Garhwal. He then shifted his capital from Chandpur to Devalgarh before 1506 and later to Srinagar during 1506 to 1519 AD.

King Ajaypal and his successors ruled Garhwal for nearly three hundred years, during this period they faced many attacks from Kumaon, Mughal, Sikh, Rohilla. The Gorkha invasion was an important event in the history of Garhwal. It was marked by extreme cruelty and the word 'Gorkhayani' became synonymous with genocide and looting armies. Subject to Dati and Kumaon, the Gurkhas attacked Garhwal and reached Langurgarh despite stiff resistance by the Garhwali forces. But in the meantime, news of the Chinese invasion arrived and the Gurkhas were forced to lay siege. However, in 1803 he again made an invasion. After subjugating Kumaon, the Tri (three) pillars have invaded Garhwal. Five thousand Garhwali soldiers could not stand the fury of their attack and King Pradiman Shah fled to Dehradun to defend himself. But his armies could not compare with the Gorkha armies. The Garhwali soldiers were killed in large quantities and were killed in the battle of King Khudbuda himself. In 1804 the Gurkhas became the masters of the entire Garhwal and ruled the region for twelve years.

The rule of the Gorkhas ended in the Garhwal region in 1815, when the British pushed the Gorkhas to the Kali River in the west despite their strong opposition. After the defeat of the Gorkha army, on 21 April 1815, the British occupied half of Garhwal, east of the Garhwal region, which lies east of the Alaknanda and Mandakini rivers, the latter, as 'British Garhwal' and the Doon of Dehradun. Known, but decided to establish his rule. In the west, the remaining part of Garhwal, which was possessed by King Sudarshan Shah, established his capital at Tehri. Initially the Headquarters of the Commissioners of Kumaon and Garhwal was in Nainital itself but later Garhwal was separated and established as Pauri District under the Assistant Commissioner in 1840 and its Headquarters was formed at Pauri.

At the time of independence, Garhwal, Almora and Nainital districts were administered by the Commissioner of Kumaon Division. In the early 1960s, Chamoli district was formed from Garhwal district. The Garhwal division was formed in 1969 with the Pauri headquarters. After taking 72 villages of Khirsu development block of District Pauri Garhwal to form a new district of Rudraprayag in 1998, District Pauri Garhwal has reached its present form today. 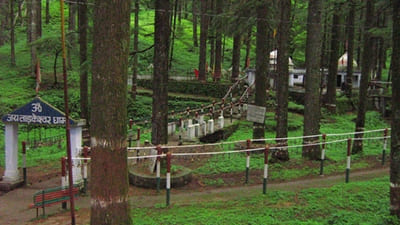 Situated in the midst of the tall cedar and pines, Tarkeshwar Mahadev Mandir is a temple dedicated to Lord Shiva and is known for its tranquil natural setting. It is situated in Lansdown which is 82 km from the Pauri City.

There are many holy temples and sites on the holy land of Devbhoomi Uttarakhand. Uttarakhand is also known as the Tapasthali of Mahadev Shiva. Lord Shiva resides on this earth. At this place, a temple of Lord Shiva is present in a very beautiful place and that is the temple of Tadkeshwar God. It is believed that God fulfills every vow sought in this temple. Every year lakhs of devotees come not only from the country but also from abroad. The Tadkeshwar Mahadev Temple is surrounded by forests of oak and deodar which looks very delectable. Many small waterfalls also flow here. This temple is one of the Siddha Peethas. Here you can visit any day from 8 am to 5 pm. But the view here on Mahashivaratri is amazing. Special poojas are organized here on this occasion. 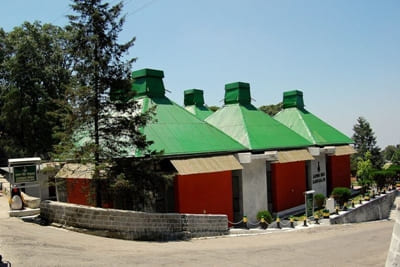 The Garhwali Mess is the ancient heritage of Lansdowne. This building, built by the British in 1888, was converted into a mess in 1892. This mess symbolizes the heritage of the Indian military, and today is included in the category of major museums in Asia. The museum has a collection of wild animal skins. The dial present in the museum shows the direction of many other mountains of the Himalayas named Nandadevi, Chaukhamba, Kamet. An important attraction to visit in the district is the Garhwali Museum in Lansdowne. It is famous for its collection of the elements of Garhwal Regiment of the Army.

KALESHWAR TEMPLE
About 41 km from Kotdwar, Kaleshwar Temple is another Lord Shiva’s temple in the district that is a must visit. It is known to house Samadhis of many sages in its vicinity.

Uttarakhand has long been known for its religious history. Khirsu is one of those tourist places, which is famous as a famous hill station at the present time. Khirsu is a famous hill station located in Pauri Garhwal district of Uttarakhand state. It is a beautiful place. Khirsu is actually a village, which was given the status of a tourist place after the formation of the state of Uttarakhand. Khirsu is situated at an altitude of about 1700 meters above sea level but the place is cooler than Lansdowne as the entire village is surrounded by high hills and dense forest (cedar and oak). Khirsu Hill Station has oak trees, cedar trees and apple orchards. From one corner of the place to the other, you can enjoy high hills, dense forest and many other places. This place has never been very popular among tourists, but over time and due to tourists looking for a cool, pleasant and pollution free environment, this place emerged as a very popular and famous hill station. And presently this place is recognized as a famous hill station. Now this place is one of the most revered places in Uttarakhand.
Located at an altitude of 1700 meters, the Khirsu hill-station offers spectacular and enchanting views of the Himalayas. The ancient temple of the deity called "Ghidiyal" is also located near Khirsu. The temple of Ghidiyal Devi is a famous site for all Hindu devotees. Khirsu is an ideal hill station to enjoy nature. From the Khirsu Hill Station one can enjoy different Himalayan flora along with different species of birds. If you want to trek from Khirsu, then there is Furkanda Point located at a very high altitude. From here one gets a panoramic view of Khirsu and the surrounding villages. One can admire about 300 known and unknown peaks of the Himalayas from the Khirsu Hill Station. This place is a peaceful place away from the urban "tumult". If you come to Pauri Garhwal then you should not forget to go to the "Khirsu" hill station..

Best time to visit Pauri Garhwal
Pauri is a beautiful travel destination located in Uttarakhand. This stunning destination enjoys pleasant weather all-round the year. The summers are not so far but when exploring the destination during the evening, wearing light woolens is the best idea. Winters are quite cold and freezing. Monsoons must be avoided as this is the time when the chances of landslides increases. The best time to visit Pauri is from March-June and September-October.